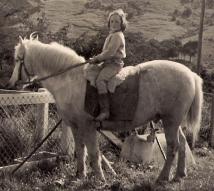 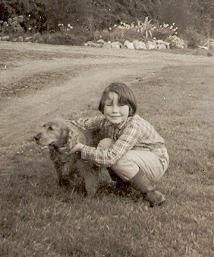 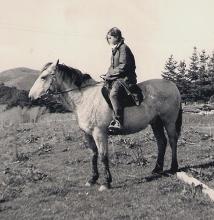 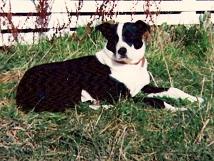 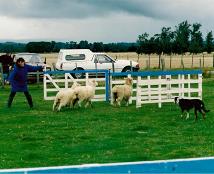 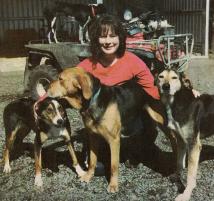 I was very fortunate in my introduction to farm dogs since I was born & raised in the heart of Auckland. Each year, from the time I was a very small child, we used to make the rather arduous car journey to my uncle’s farm – “Drumcairn”. He was a distant uncle by marriage.

Ian Nicol was renown as not only an excellent stockman & farmer but also as a top man with a horse & dog. It was there on his steep Wairarapa hills that I learn’t to ride a horse & although he never taught me about dogs – why would a city girl need to learn – I saw first hand how a well trained & obedient dog handled stock. In return for the hard & honest work his dogs did, my uncle housed them in spacious clean dry dog-motels. And, his dogs were well fed – their coats were shiny, their eyes were bright & their ribs were covered.

I cannot put a value on watching him with his dogs; it is who I am today.

After spending every August holiday riding a lambing beat with ‘uncle’ & saying “I am going to be a landgirl when I grow up”, I was finally allowed to leave home at 17 to start a career working on the land – much to my parents horror.

Funnily enough my love for horses was the main reason farm life was so attractive but after training my very first dog, a black & white Heading pup named ‘Rod’, I was totally hooked on rearing & training working dogs. A number of years later I mated Rod to my young Heading bitch, Patricia, & that resulting litter was the beginning of a lifelong passion for breeding sheepdogs.

Dear old Rod was also responsible for my interest in dog trialing. A friend who had seen him work, suggested that I trial him, which I did & loved. Not that I was ever very serious about it or madly successful. I think my nerves & the resulting mistakes were more our undoing than the dogs – nevertheless I enjoyed the days out & being in the prize money from time to time.

Back in those days it was a definite handicap being a woman in the sheep farming industry. It was easy enough finding employment in the dairy or racing sector, but on a sheep property - nigh on impossible. Virtually all my jobs were gained by helping out at a busy time & the ‘boss’ realizing that I had a very capable team of dogs, & that I possessed ‘stockmanship’. This led to permanent work.

My dogs were my passion - my family, my buddy’s, my hobby; they made up for the living conditions, poor pay, long hard hours & non-acceptance due to being a female in a man’s world. Sounds hard - sadly true - there is no way in hell I would have worked for as long as I did on farms if I hadn’t had my dogs.

I shepherded for 25 years & when I decided to call it a day & try other things I still kept ‘my girls’, & continued to breed the odd litter – just for fun.

And that brings us into this decade, many years later & much longer in the tooth. I am certainly not the most qualified person with working dogs but I have a genuine desire to improve the well being & overall care of farm dogs, & to help people have a greater understanding of these two, truly remarkable, breeds of dog. 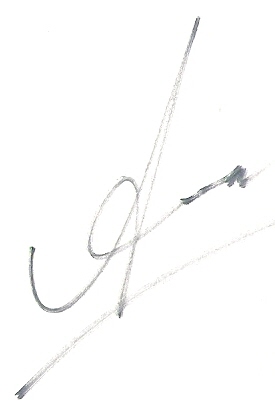